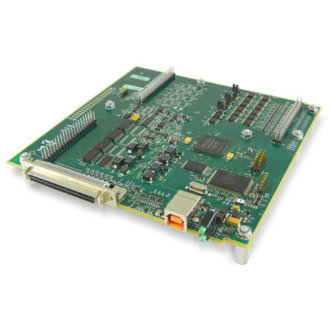 Four 16-bit, 1 MS/s analog output channels have an output range of ±10 V. The maximum rate at which analog outputs update depends on several factors, including the speed of the USB port. Typically, with the A/D operating at the full 1 MS/s rate, each analog output updates continuously from computer memory at 1 MS/s regardless of the number of channels in a scan.

The 24 TTL-level digital I/O lines are software selectable for input or output. The typical maximum transfer rate (system paced, asynchronous) is 4,000 8-bit port or single-bit reads/writes per second. Each board has an onboard jumper for configuring the digital I/O lines for pullup or pull-down (default).

Four 32-bit counters are included in USB-2600 Series devices. Each counter accepts frequency inputs up to 20 MHz. Four pulse width modulation (PWM) timer outputs can generate a square wave with a programmable frequency in the range of 0.015 Hz to 32 MHz.

Find all MCC ‘s DAQ-USB modules on our website