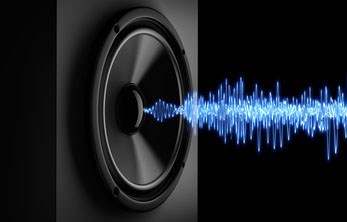 But when these changes in atmospheric pressure occur more quickly, at least 20 times per second, you can hear them and call them “sound.”

Sound can also be a source of annoyance. Indeed, music that some people crave is considered by others as an undesirable sound.

In acoustics, an unwanted sound is called “noise”. The sound does not have to be strong enough to be embarrassing. A cracking floor, a leaky faucet or the neighbor’s lawnmower that starts just when you’re going to enjoy the tranquility of a fabulous Sunday afternoon in summer can hinder more than a thunderclap.

The frequency of a sound wave (movement of air particles produced by a vibrating sound source) is the number of pressure variations per second expressed in hertz (Hz). The sound has a very wide frequency range. For young people, the range of audible frequencies is between 20 and 20 000 Hz.

The pascal (symbol: Pa) is the unit SI (International System of Units) of constraint and pressure. It takes its name from the scientist Blaise Pascal. In accordance with the rules of the International System, the name of this unit begins with a lowercase (pascal), but since it comes from a proper name, the symbol begins with a capital letter (Pa). The equivalences are: 1,013 hPa = 1,013 bar ≈ 1 atm = 760 mmHg (millimeter of mercury or torr).

A pascal pressure is a uniform stress which, acting on a flat surface of 1 square meter, exerts a total force of 1 newton perpendicular to this surface.

Format
Function
Type
Interface
Brand
cd911190ad8c1944d77b2583fc7f376cUUUUUUUUUUUUU
We use cookies to give you the best experience on our website. If you keep using it, you agree with the use of cookies.OkRead more